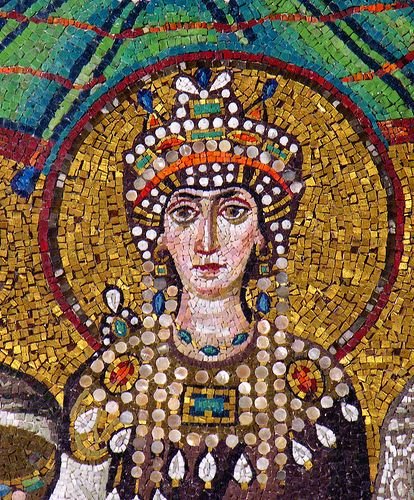 So who is Empress Theodora? And why am I inspired by Her Story?

Theodora’s story is one of rags to riches. She came from a background that was considered extremely low class; her mother was a dancer and her father was a bear trainer. Her father died when she was four leaving her mother and her sisters to support themselves.

Whilst working as a dancer she was spotted be a Syrian official who took a liking to her and took her with him when he left Constantinople for North Africa. Theodora stayed in Africa with him for four years. Eventually she left and made her way back to Constantinople to become a wool spinner.

It’s not recorded how they met but Justinian was attracted to her by her intelligence and beauty. Her background as a dancer and mistress meant that in order to marry her Justinian had to force through legislation legalising unions between actresses and men of senatorial rank and higher.

Once crowned Empress of the Eastern Roman Empire Theodora quickly became Justinian’s most trusted adviser. Although she was never coregent her superior intelligence and political acumen led to Justinian describing her his "partner in my deliberations.". Many people believed that she was the true decision maker about what went on in the Empire. She had her own official court entourage, and her own imperial seal.

During their rule Justinian and Theodora rebuilt and reformed Constantinople. Together they built the stunning Hagia Sophia. Theodora herself was instrumental in expanding women’s rights in divorce and ownership of property. She was a champion for women’s causes passing laws prohibiting the trafficking of young girls, closed badly run brothels and set up safe houses for sex workers.

She died before Justinian. Her importance in the political day to day is shown by the fact that after her death very little significant legislation was passed. She was probably the most powerful and influential woman in Byzantine history.